From “Living to Eat” to “Eating to Live!” 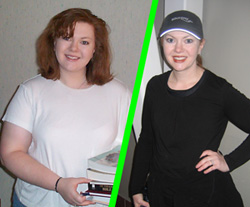 I was always pretty active when I was younger with a pretty standard weight.  It wasn’t until I took an illegal hit during a college intramural football game causing a serious knee injury, that my true battle with weight began.  I was immobilized for months, and because I was wearing baggy sweatpants due to surgeries and bulky knee braces, I had no idea.  I really had NO idea that seemingly overnight I had gained 40 lbs.  I wasn’t eating crazy amounts – just what I had been eating.  The difference was, I wasn’t able to walk the typical hour a day required to go to classes or the football practices in the evenings or extra walks with friends for “real” exercise.  That was when I learned that exercise and weight control go hand in hand, especially for me.

That injury was the start to a slippery slope that ended with me weighing in at 254 lbs. and having no idea how to wage the war necessary to battle this bulge.  I would go on diets and drop 10 to 15lbs but it would come back.  Sound familiar to anyone?  It wasn’t until after nursing and then burying 2 parents destroyed by cancer and having our first little one that I figured out my determination.  This thing wasn’t about looks any more, it was about life.  It was about quality of life and longevity of life.  Now I might be struck with cancer tomorrow, but I can do all I can to prevent it and to be healthy enough to fight if the time comes.  I look into those little eyes and I know I have to try and that I have to succeed!

On January 1st of 2008 I entered the doors of the local YMCA with much trepidation to begin the battle.  I didn’t know how to use most of the machines and because I was so heavy, I was convinced that everyone was watching me.  I got on the elliptical, but it wouldn’t turn on.  I thought this thing must be broken.  I got back off again, my cheeks flooded with the fire of embarrassment.  I headed to the stationary bike.  Same thing.  With all the courage I could muster, I leaned over to the person beside me and asked how to turn the machine on.  They coolly explained that you had to start using it to turn it on.  (There are a lot of life metaphors there I think.) I felt sick to my stomach and a little depressed for my ignorance, but I hung in there.  I was able to do 20 whole minutes of exercise.  It made me tired and sore, but I stuck with it.  It took a couple of weeks for my confidence to build.

In the meantime, I began my food journey.  I had tried diet after diet during my life.  Everything I could stick with for a while, but then I couldn’t bear anymore and the weight would come back.  I have always been passionate about food.  I would rather read a cookbook than any other book, go to the farmer’s market than any mall, and watch the food network than any other show.   I am just hooked on food.  What I was learning was that my passion for food didn’t have to end, it was just beginning.  I began learning what the vegetables with the most nutrients were.  I wanted to figure out how to enjoy the same tastes and textures, but in ways that would reward my body and not destroy it.  I began eating five or six times a day and counting my caloric intake.  Yes counting calories.  Why so many people shy away from this is crazy.  There is NO other way.  In my past life I had done programs with points and that was truly harder to figure out.  You want to lose weight – you burn more than eat by not eating too much.  You want to lose weight – you don’t kill your metabolism by eating too little.  The only way to know this is to count those calories and write them down.  I made my self a little chart to write it all down and keep track – my own accountability.

The other thing I knew was that I had to stick with this for it to work.  The place where I had stumbled EVERY time.  I had done diet after diet and all were too restrictive, even eliminating food groups.  I knew this didn’t work so I had to come up with a plan.  The first thing I did was allow a meal a week (If needed) to eat what I had been missing or craving.  Most often this was a cheeseburger.  NOW I know how to make a VERY rewarding healthy cheeseburger at home so this doesn’t happen so much anymore.  The other thing I knew was that a sweet fix was going to be necessary.  I purchased mini packs of M&Ms. One pack is 70 calories and wouldn’t break the bank.  Perfect. Now I am set for long-term weight loss without totally denying myself anything.

At the end of 2008 I weighed 181 lbs.  That is a 73 lbs weight loss.  And after a year of working out, I was ready for a new challenge.  I was ready to train for my first sprint Triathlon.  My husband (king of support) had been competing for a few years and though I loved cheering him on, I was tired of being on the sidelines and was eager to compete myself.  I wasn’t at my goal weight yet and I had NEVER run a 5k in my life.  I decided to attend the Y’s walk to Run class.  The instructor started us slowly and we built and built.

On March 14th of 2009 (what would have been my Mother’s 61st Birthday) I was tackling my first race, never having run 3.2 miles without walking.  I had so many butterflies in my stomach before the swim I thought I might throw up, but here I go.  Swim went really well, I was only passed by 2 guys right at the first and I held the feet of the second guys until the end.  I ran out into the FREEZE and got my bike gear on.  I ran out of transition and mounted my bike, but I couldn’t get clipped in!  I really couldn’t get clipped in.  After what seemed like forever, I thought CLEAT COVERS!  I got off my bike and took the things off with much disgust.  Back on the bike with no pressure to do well. J  I rode hard and didn’t really get passed on the bike.  That felt good.  My legs were FROZEN pistons.  I dismounted at the line and almost fell on my face.  Why wouldn’t my legs work?!  I started the run and wanted to walk at the beginning, but my main goal was not to walk.  I wanted to cry this hurt so badly and my breathing was crazy.  I had to get control.  At the very spot on the road where I wanted to give up, some spectators who knew me from the Y were yelling for me and encouraging me.  It gave me just what I needed to keep moving and to not give up and walk.  I got to a better pace and gained control over my breathing and most importantly didn’t stop!  I finished better than I had thought possible – I never walked.

I went from thinking I am never doing this again while on the bike to  – I could do this better.  That led to three other Sprint Triathlons that year.  I came so far during the year.  Another 15 lbs dropped and competing in the Athena division I was able to win my division on the last race of my season.  That IS coming a long way from just trying to finish the first race in March.  Today I am on the last of my weight loss journey with a vengeance and training for a repeat appearance at Paris Island Triathlon, hoping to seriously better my time.  I love training and building on last years work.  Here we come March 20th.  And who knows how much weight will be gone, but one thing is for sure – I have my life back!